The LMR industry for both Amateur and commercial use portable 2-way radios, that need a significant about of power to operate, especially while transmitting. Power normally comes from a battery pack to supply DC voltage to the radio's circuits. These packs have some limitations for size and weight, especially the "old-school" nickel-cadmium type, which will be covered in this article. "Ni-cads" as comondly called have a tendency to obtain a "memory" effect, mostly due to short charge and discharge cycles. This happens with portable radios that are "stored" in the desktop charger unit, especially with the non-"smart" chargers of past years.

Part of battery pack maintenance is to correct or "repair" this memory effect. One simple method is to let the pack run down so the radio stops working. This, however, runs the risk of reverse charging the weakest cells. When the weaker cells reach zero volts (potential) the continuing current from the stronger cells continues to flow through the weaker cells, thus, charging the weaker ones in the wrong direction (potential). A reversed charge on a cell will quickly ruin it.

A better way to discharge the cells is putting a load on each and every cell being maintained. This is possible with a battery pack that easily comes apart and uses common size cells, such as the AA size show here. All the cells can be removed from the (series string) pack and put in a discharge holder. This holder puts a load on each individual cell. Each cell can be run down to a specific point, for example 1.0 volts. At this point the cell is to be considered in a discharge state. Further discharging is unnecessary and sometimes can shorted the life of the cell. 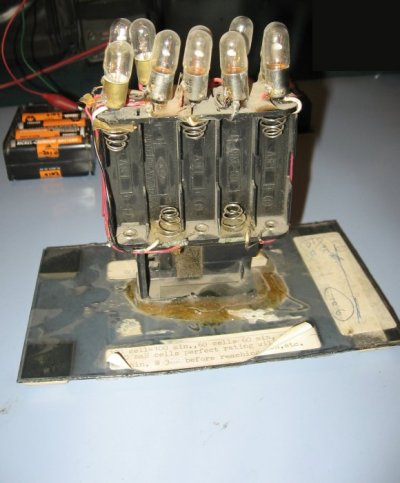 For the fixture a 10-cell holder was modified to break the series connection, and a load lamp was soldered in place, across each cell. For the load to draw the proper current for a AA cell rated a 500ma, a GE # 43 lamp was used, which draws 320ma on a fully charged cell. The load can be visually monitored while the tech can do other things around the shop during this time, which normally is about an hour. When the lamp is just about to go out is a good point to stop, being the 1.0 volt state. 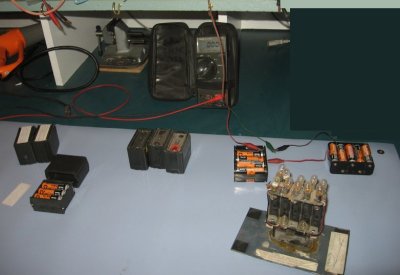 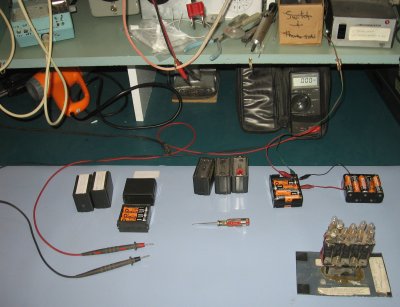 Many cells can be discharged, checked, recharged and re-discharged to observe the quality of each cell. For charging, more 10-cell holders (and other types) are used. During the charge cycle all cells are series charged. Because of the varying amount of cells will require the charger (voltage) to be adjusted. Shown here is an old supply, modified just for unregulated output. A selector switch with higher power resistors inside will allow the proper charging current to be use, depending on the number of cells in the charge string. 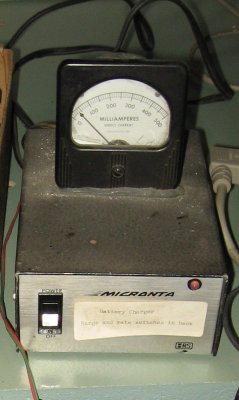 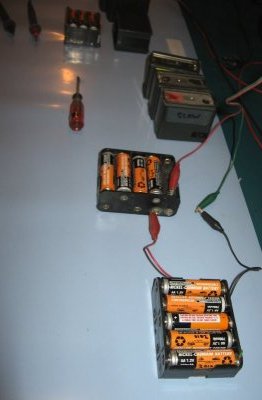 Back to SRG's tech page.