The Author's place is on a plateau, with a 360° view and a 10-acre field for antenna research and development. In the background of the right picture is one of the structures for testing antennas; the other R-25 tower which is not in view. For general "tests" the Author mounts the antenna to the gate post while using the vehicle for a power and RF transmitter source and a general "table" to lay out test equipment for this procedure. The metal fence may help make a ground plan with signal tests later. The (linear) watt meter can be nicely hung on the fence as well. Log measurements are also performed for a more useful evaluation. Some of these pictures were taken during another brand of antenna, but give you a general idea on the setup. Some of them are small to help dial-up folks however, are enlargeable by clicking on the center if you wish to examine one. This page/document was quickly "thrown" together in one evening; it may be changed, later. 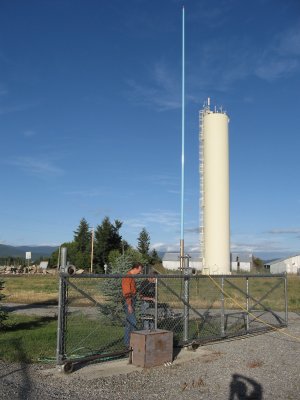 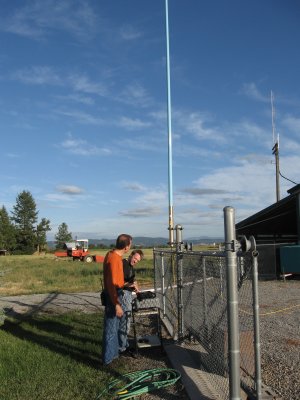 The SRG Hub repeater that connects the out of town 80/20 coverage may have a bad antenna. It's an old Andrews out of commercial service and its been in SRG's operation for another 15 years or so. Therefore, it's time to replace it. The two main criteria was the length needed to be about 20 foot (for mounting top and bottom) and good gain, because one of the link paths was 156 miles. The cost was about $1,000 on the package. The antenna arrived in good condition. Shipped inside the usual cardboard "tube", it was carefully unpacked and temporarily mounted on the Author's testing area on the fence post out front.

The antenna was supplied with a "pigtail" (jumper) terminated with a N-male therefore, was installed as part of the test. Normally the upper part of the tail (inside the base of the antenna) is taped ahead so to avoid this task on the 100 foot tower. In the permanent installation an outer mastic pad is layered over with a layer of Scotch "88" tape layer for superior sealing. Just as a side note, improper sealing against water is one good way to "kill" an installation over a season. 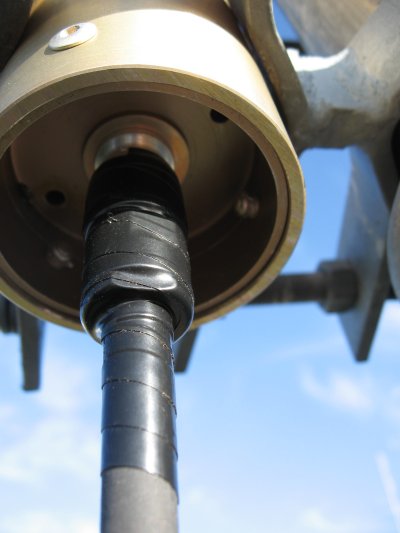 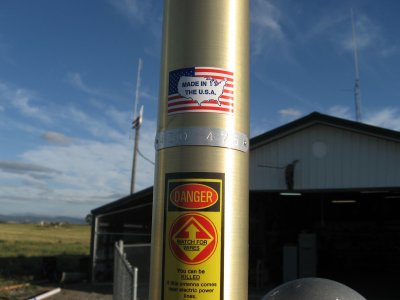 Doug and Jeremiah, joined the Author for the testing. The first test was to verify resonance/RL at the operating frequency specified in the order, which was 441 MHz. The second test was to verify it would duplex properly. The last test would be a mobile coverage check around town. As mentioned before the antenna was temporarily mounted out front.

Our tower crew set up a work station with the Anritsu antenna analyzer, AKA as "SiteMaster" unit. Someone scowled up one's face after seeing the plot! Yikes ! 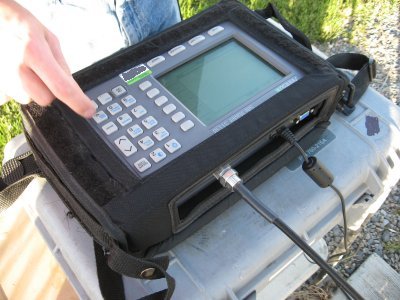 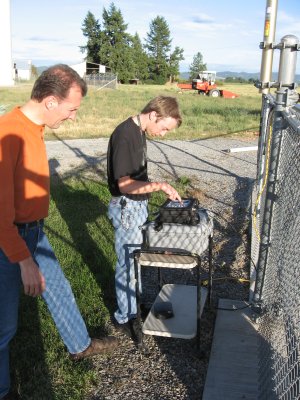 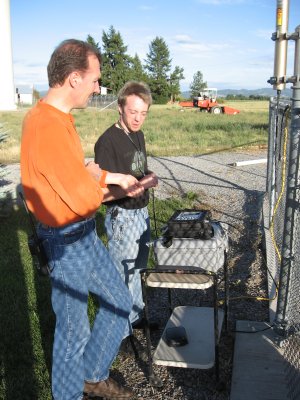 The first test show some interesting plots. Here's some snap shots on what we observed. Although the antenna was advertised as broad band (430-475 area) as you can see it really is only real good at the commercial band 462 and above. We did a final plot and saved it inside the SiteMaster. Later the "file" was converted to a more friendly form, which you can view HERE in jpg form. 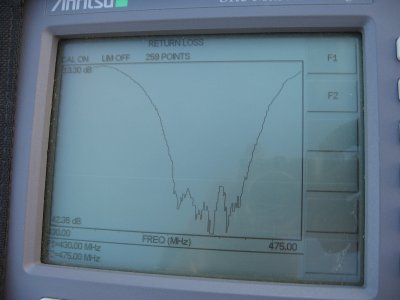 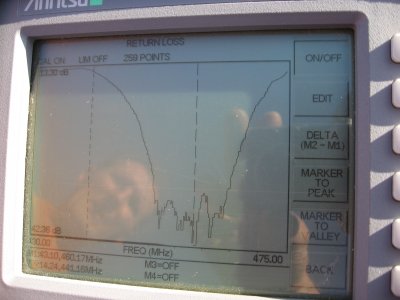 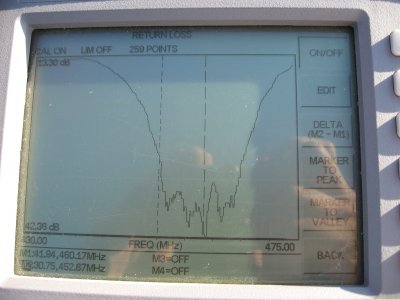 The second test with a handy spare repeater operating at 444 MHz duplexed well however, as the previous test indicated the return loss was not too good. For you "watts" readers, here's the Bird thru-line version of operating on 444 MHz with a 25D slug. Keep in mind this is 3 MHz higher than the frequency we ordered the antenna. The left picture is forward power of 18 watts forward, and right picture of 1.4 watts reverse. Rough calculations come out to a VSWR of 1.77 and a RL (return loss) of 11.09 db. Not good. 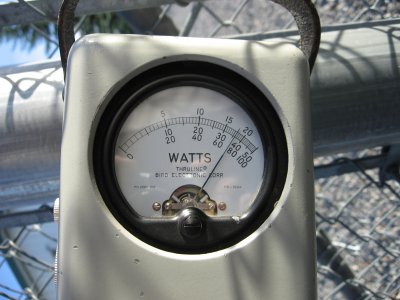 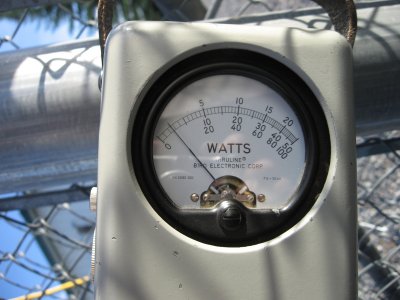 The Second test was to verify the antenna would duplex properly with no "noise". After this, the crew drove into town for the coverage test. These two tests seemed to be successful. 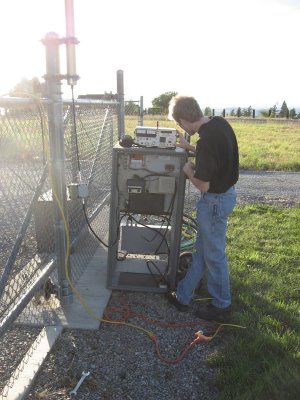 Conclusions: This antenna had excellent specifications for the commercial 450-470 MHz band and the Author would recommend it for that use. For amateur it will work however, you would have to put up with excessive RL making your transmitter or isolator work harder. The best way is communicate and ask to see the plot from the manufacturer on your frequency before buying. It will save both parties some grief.

STAY TUNED: As of 2009 another brand of antenna is being purchased and going to be evaluated !